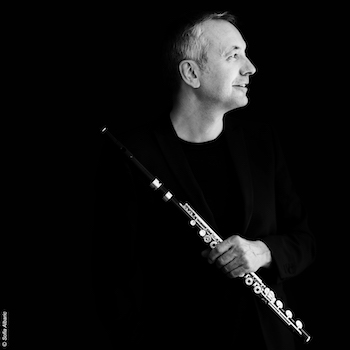 Meet Philippe Bernold at the Convention

> Tribute to CNSM Teachers and Assistants

Meet Philippe Bernold in our blog

Philippe Bernold began his musical studies in Colmar, France, studying the flute and later composition and conducting under René Matter, himself a student of Charles and Fritz Münch.
He then attended the Paris Conservatory, where he earned the First prize in flute and the next year, at the age of 23, was appointed first flute of the National Opera Orchestra of Lyon. In 1987 he won First Prize in the Jean- Pierre Rampal International Competition in Paris
This prize paved the way for an international solo career with renowned artists and orchestras, from Rostropovitch to Rampal. Orchestras with which he performed include those of Paris, Tokyo, Budapest or Moscow with such conductors as Menuhin, Gardiner, Maazel or Nagano. Mr. Bernold’s performances have taken him from Paris to Seoul, from London to Moscow, and to the principal festivals around the world.
In 1995, encouraged by his master J.E. Gardiner, he founded The Virtuosos of the Lyon Opera, with which he performed extensively thereafter. Since, he has conducted orchestras such as Sinfonia Varsovia, Simon Bolivar orchestra (Caracas), Baden Baden Philharmonie, Chamber orchestra of Paris and Geneva, Kanazawa ensemble (Japan) and Cappella Istropolitana, with whom he was the first invited conductor since 2003
Philippe Bernold’s first CD in 1989 won him the Grand Prize of the Charles Cros Academy. Since then, he has recorded more than 20 CD with Harmonia Mundi, EMI…
Philippe Bernold is Professor of Chamber Music and Flute at the National Paris Conservatory