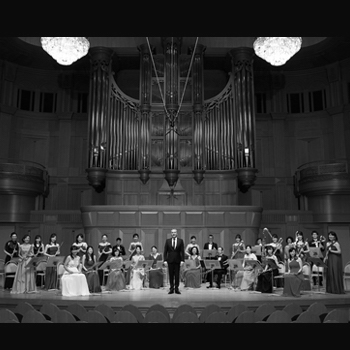 Universal Flute Orchestra Japan (UFOJ) has been founded in 2015 by professional flute players in Japan, with the mission to find new possibilities of flute orchestra through the performance of its highest quality. Passionate freelance flutists from all over Japan gather for the sake of making music to touch the audience.

In Feb 29th 2016, UFOJ had the first concert at Izumi hall in Osaka, which was very well-accepted by the audience for its accomplished ensemble skill. The concert was reviewed “It sounded like a paradise of music.” by The Mainichi Newspaper. This performance will be released via Dolce Classic Channel Online in August.

With the baton of Our artistic director Philippe Bernold, who is the flute professor in national conservatory in Paris, UFOJ will start its first season. Their goal is to be internationally accepted as the very best professional flute orchestras.